Write about evil: how you understand it (or don’t), what you think it means, or a way it’s manifested, either in the world at large or in your life.  Photographers, artists, poets: show us EVIL.

I used to believe in the innocence we all possessed and how pure we all could be.  A long, long time ago.  If you assumed it was in my adolescence, you would be correct.

As you grow older and you experience how much pain can be construed, all those beliefs you had a child seems like a far away in the distance fictional memory.

I don’t know if I understand evil in the sense that I know why it even has to exist, seriously but I have seen what it can do.  It isn’t the physical world that possesses it either.  People are mean.  They show us evil.  They are the examples that not even words can describe. 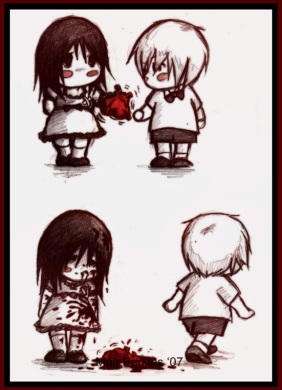 There are different evils too.  Some worse than others but all the same if you are participating in an action that hurts someone somewhere.  To me, evil is its least lethal form is just simply taking advantage of another person.  Looking at a person who has let their guard down and opened their soul to you.  Taking that precious gift without appreciation and diminishing it by your own selfish agenda.  That to me is evil.

No one likes an anti-bacterial, anti-itch spray on an open flesh wound.  And I say that because, when you open your heart to someone and you let your guard down, your heart is, figuratively speaking, exposed.  When someone hurts you deliberately or not even deliberately but takes that exposure for granted it burns, it stings and it makes you feel like the world is an evil place, in turn, stitching up your heart with a thicker thread.

Then of course, there are the people who kill, hurt children, adults, steal, lie, and cheat.  And the other evils that are considered more natural such as natural disasters, sickness and to some people, death.  I do believe all of what is here in this world has been created by us in some way, in some form and maybe not right now but over time.

So remember the world isn’t an evil place, it is you and I who can’t learn to love each other more than we love ourselves and until then, evil will grow until we destroy ourselves.  It won’t be the world’s fault.  It will be ours.

There was an error retrieving images from Instagram. An attempt will be remade in a few minutes.